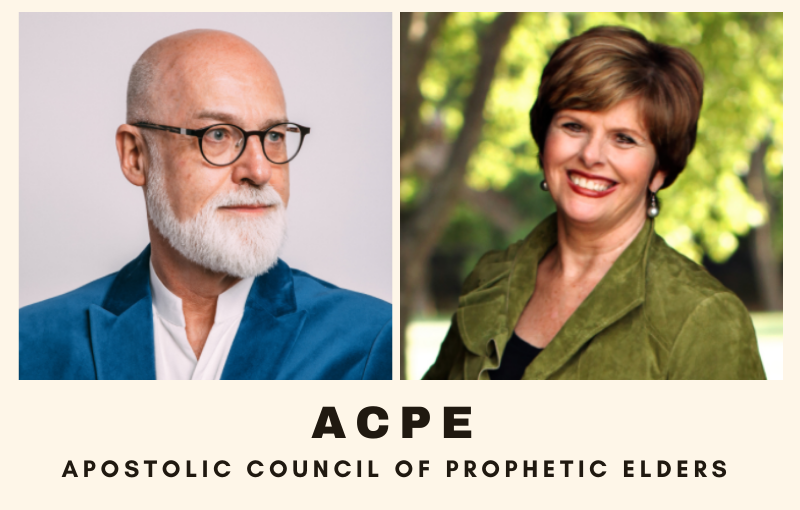 The Apostolic Council of Prophetic Elders was convened 22 years ago under the leadership of C. Peter Wagner and steered by Cindy Jacobs of Generals International. For years, this council has met together to seek the face of God for a collective word of the Lord for the coming year(s), for the Body of Christ, the United States in particular, and the nations of the earth. This relationally-based council includes a wide diversity of prophetic giftings of mature prophets, seers, prophetic intercessors, men and women, diversity of ethnic backgrounds, the joining of the generations, and several international delegates.

This word of the Lord for 2021 came out of our meeting in Dallas, TX in November of 2020. That was before the events we have recently begun to witness. This compilation of words that came out of that time together may not be for the year 2021 but maybe for a season of time extending beyond the boundaries of our earthly calendar.

It is also possible that some were given for the purposes of intercession, so that we may pray to mitigate against the severity of them. We may even avert them as we pray. We are not to take any of these words as fate, but in humility, intercede so that they may be changed, subject to the response of God’s people.

A Year of Great Contrasts

It will be a time of stark contrast in the aftermath of a reset. When you turn off your phone, it goes black and comes back on with updates and changes. So, we are now living in what has been reset. The reset button has been pushed and it will create a stark contrast to what has been.

One of the Scripture passages that exemplifies this contrast the most is found in Matthew 24:6-8 (NKJV)

“And you will hear of wars and rumors of wars. See that you are not troubled; for all these things must come to pass, but the end is not yet. For nation will rise against nation, and kingdom against kingdom. And there will be famines, pestilences, and earthquakes in various places. All these are the beginning of sorrows.”

Persecutions will deepen, and in contrast, the greatest revival the earth has ever known is upon us. One primary manifestation of this revival will be in the Middle East in nations, such as Sudan, who have aligned with Israel.

“For men will be lovers of themselves, lovers of money, boasters, proud, blasphemers, disobedient to parents, unthankful, unholy, unloving, unforgiving, slanderers, without self-control, brutal, despisers of good, traitors, headstrong, haughty, lovers of pleasure rather than lovers of God…” (2 Timothy 3:2-4, NKJV)

Even in the midst of great moves of God, the contrasts between good and evil will become more apparent. In the U.S., this will be manifested and seen in government structures as some become more godly and others turn away deeper and farther from God.

• Wars and Rumors of Wars

Watch China very carefully. There is the threat of the red dragon militarizing against the United States and other countries, particularly Taiwan. While there will come a time when the Bamboo Curtain will fall, and when China will lead in world economics, it is not to happen under a Communist Regime. Satan wants to change the times and seasons, but if those who follow the Lion of Judah will cry out in intercession, the communist takeover will not advance.

The red dragon wants to swallow up Vietnam and South East Asia as well as Korea. As “Gatekeepers of Prayer,” we cannot allow this to occur. If Japan tries to “ally” with China, she will find herself devoured also. This dragon has an insatiable appetite to be a ruling empire. In fact, there is an empire spirit or spirit of dominion that is on the move. As big of a threat as Islam has been to the world, communism is actually a greater threat in this era.

Watch for more ways in which China will gain access to the U.S.A. through kickbacks, election-tampering, and sabotage. Satan has many plans, but if we pray, there will be a great checkmate of satan’s plans.

Shakings in Every Realm of Society

There are shakings happening between political systems, but there will also be physical manifestations as well. It is not that these shakings are not already happening, but the frequency will escalate, including volcanic eruptions, earthquakes, and the like. The whole earth is groaning. There will be new political parties that will be taking shape and that will be formed and increase in influence.

For the US, it was noticed that the reconstruction after the Civil War got derailed and was left incomplete. God is going to move upon this issue once again to bring about a more complete justice. The godly, righteous remnant of the African American community will arise and become very visible in leading the way in seeing this justice movement happen. These shakings will ultimately result in a justice movement that brings long-term change.

Political systems that support abortion will also be shaken and will be affected economically.

There will be alignments that will be made both in the positive and in the negative. China/Russia/Iran will move towards closer alignments. Some of these alignments will even be surprising. However, the bear and the dragon will come to odds against each other if we pray.

Iran’s government in the coming years will fall; it will happen seemingly overnight. God is watching how they persecute the Believers in their land.

There will even be a great global reorganization in preparation for the end-times. We are seeing the prophetic beginnings of the Isaiah 19 Highway forming before our eyes!

Detailed exposures of both China and Russia will take place. God loves the Chinese and the Russian people. This is not anything negative towards the Church in China and Russia. Great revivals and renewals are coming!

Civil unrest will continue in the U.S. It will, in fact, escalate. The prophets called for emergency preparedness. All may not be needed, but crisis preparation, as far as food, water and supplies, is dictated by wisdom. We have given previous warnings about a possible civil war on U.S. soil and we are seeing the groundwork for that being laid—but God!

More exposures will take place in both political parties. Layers upon layers of exposure will occur until the root is fully exposed and the ax can be laid to it. This is not only for the U.S. but will occur world-wide.

The year 2021 will seem to have some of the same characteristics as 2020. However, the Body of Christ will learn to thrive and not just survive.

The economies of states will shake and there will be a great suffering of the people in those states if they do not turn from wickedness. However, just as in Egypt during the plagues, God’s people will be protected and prosper. Whether or not the whole of the U.S. will take a huge downturn economically is still weighing in the balance.

It is a time for spiritual war. The Bride of Christ must put on combat boots and be prepared for battle. We must resist satan and he will flee! Teaching on how to wage war against the enemy is essential. Angelic hosts are being released to assist us as we war on Earth and they war in the heavens.

• This Includes Faith Over Fear

Men’s hearts will fail from fear, but God will cause His remnant of overcomers, who have learned to stand on the Word with faith and not fear, to overcome.

• This Includes Peace as a Weapon

We will walk in a new level of peace that will be a weapon against distress!

The amount of glory that we are going to see released in this new era, after the reset, will come in suddenlies. Those who have been crying out for revival will suddenly see, receive and experience a great revival. This revival will transform societies and raise up reformers in all areas of society. The revival and awakening will not only be for the saving of souls but the healing of nations. Miracles will be commonplace in the marketplace and Hollywood.

This will also lead to a renaissance in the arts, with great creative anointing being displayed through worship and even other art forms, such as painting, sculpture and dance.

Another sign and wonder of this glory awakening will be spontaneous deliverances. People bound in drugs, pornography and other addictions will be set free. The ministry of deliverance through people called to it will once again be front and center in the Church.

There will be a release of glory and, not unlike the Book of Acts, there will be resistance to the moves of God. Note that when miracles in the book of Acts took place, satan stirred up those in idolatry and in the religious system against it. However, this only caused the Church to increase and multiply!

• This Includes the Refiner’s Fire

The Lord is watching our reactions, even to things that satan is putting in our way. We are called to be overcomers. We cannot forget that we are being “trained to reign” for eternity. We are in the end-times and this world is not our home. While we are responsible to steward this world and disciple it, this is just the beginning of our lives. We are in the midst of the “Refiner’s Fire.”

• This Includes a Time to Build

Just as in Nehemiah’s day, we will “arise and build” in the midst of chaotic times. We will learn to build with a sword in one hand and a trowel in the other. Don’t come down off of the wall no matter what the enemy throws at you!

The Days of Noah

It is now as in the Days of Noah, but God will enable us to stand with five words that all start with a “P”!

For those of us who are standing on the promises, we will experience protection, provision, and the other ones listed, and triumph in the days ahead.

The remnant Church will take a stand against evil coming against them both personally and corporately—and will win! Ephesians 6 will become a major theme once again. Worship will be both a weapon of war and the means to not become battle-fatigued in this season.

There is calling to use as weapons of warfare all the previous words given through the years. One was “The Turn Around Year”; another was about the “Suddenlies.” Those who believe and apply this convergence of prophecy will triumph!

Let’s stand on the promises of God’s Word together and see the Glory Awakening Arise in Jesus’ great name!

Having Done All We Stand!